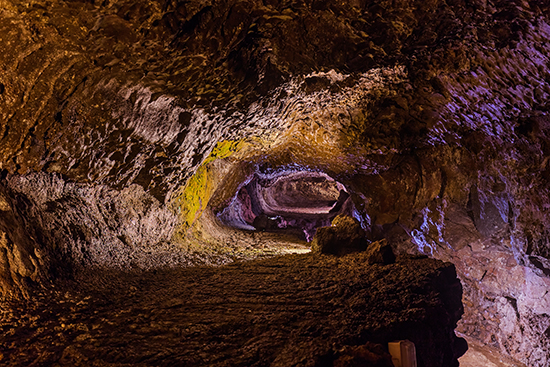 If you thought the Grand Canyon was Arizona’s only amazing geological feature, think again. From extinct volcanos to meteor impact craters, sandstone cliffs and underground caverns, the 48th state is filled with photo-worthy wonders that don’t necessarily make the record books.

According to the Arizona Cave Survey, Arizona is home to some 2,400 verified caves. That’s not including the 95% of caves lurking under the surface with no visible entry point. While some of the more well-known caves are in the lower half of the state (Kartchner Caverns near Tucson, for example), the area in and around Flagstaff also has its fair share of underground haunts.

Lava River Cave in the Coconino National Forest is perhaps the area’s best known cave. It was formed over 700,000 years ago by molten lava flowing from a now-dormant volcano near Michelback Ranch. A river of molten rock poured from the eruption, leaving ripples and rocklike formations in the cave floor as it hardened. At about three-quarters of a mile total, Lava River Cave is Arizona’s longest cave.  It remains around 30-45 degrees throughout the year, with icicles forming even in summer.

It’s a little farther out from Flagstaff and the Mormon Lake area, but worth the drive to this underground spectacle – especially if you’re planning to see the Grand Canyon during a Northern Arizona vacay. Located 21 stories below the surface you’ll find the largest chain of dry caverns in the U.S., with several tour options including a nighttime ghost hunt and a Wild Tour through newly discovered caves.  There’s even an underground cave suite that you can stay in overnight; though the $850/night price tag and infrequent availability make staying near Flagstaff or Mormon Lake a better option.

Colorful spring wildflowers are one of the rewards of this moderate hiking trail northeast of Flagstaff. Take the winding trail through volcanic cinder fields and you’ll also find dozens of small caves that were once home to traveling Native American tribes. Many of them are small enough that you could barely fit a few friends and a campfire. Their hidden nature makes traversing Old Caves Crater more like a fun obstacle course that travelers complete in an average of 2-3 hours.

All three of these caves can be easily accessed within an hour or two of Mormon Lake Lodge, which makes an excellent base camp for hikers wanting to steer clear of touristy types around Flagstaff and near the Grand Canyon. If you grew up watching Goonies, or you always wanted your own Bat Cave, Northern Arizona is a great place to live out your underground adventure fantasies.