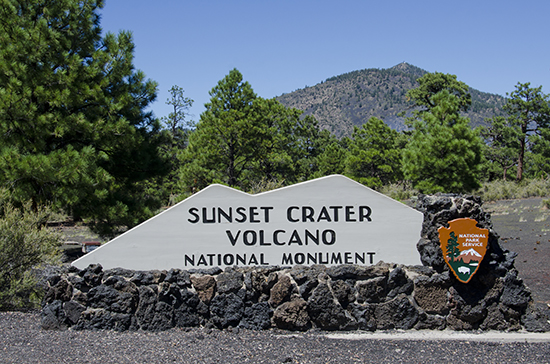 Arizona is home to a fantastic array of scenic vistas, from cacti-covered desert to pine forests, mountains and, of course, the Grand Canyon. What many travelers don’t know is that the 48th state is also a land of volcanoes.

Located just 15 miles northeast of Flagstaff, Sunset Crater is part of a nationally protected volcanic field. The cinder cone volcano is one of the youngest volcanoes in America, and the youngest among the 600+ cones in the San Francisco Volcanic Field. If you’re worried about a Pompeii scenario, relax. Sunset Crater’s volcano hasn’t erupted since the 12th century and experts say it’s unlikely that we’ll see an explosion there anytime soon.

Average Joe vs. The Volcano

The bad news is that travelers can’t peer into the heart of Sunset Crater. The trail up to its vent was closed in the 1970s due to erosion caused by human foot traffic. The damage done can still be seen in deep gashes carved into the volcano’s surface. Fortunately, the entirety of Sunset Crater can still be viewed by taking the Forest Service trail up O’Leary Peak.

Don’t overlook northern Arizona’s other craters. Take the 1.6-mile Lenox Crater Trail up about 300 feet in elevation for panoramic views of the volcanic field, Bonita Lava Flow and the top of nearby Sunset Crater. It’s a relatively easy hike that can be done in an hour or two, though watch out for loose gravel in several areas of the trail. Another impressive geological feature in this part of the state is the Mormon Volcanic Field near Mormon Lake Lodge. The flat-topped Mormon Mountain is an extinct volcano offering views of Humphrey’s Peak, while the lodge’s cabins provide a quiet respite from the city with easy accessibility to Northern Arizona landmarks like Sunset Crater and Meteor Crater.

Don’t want to go it alone? Sunset Crater park rangers offer guided tours of the lava flow and volcanic trails every Friday through Monday. Easy and strenuous level hikes are available. Tour guides provide history and background during the walks, so you won’t need your smartphone for anything except taking awesome panoramic pics.

Ride into the Sunset

The Sunset Crater-Wupatki Loop Road, also known as County Road 395, is a 30-mile descent through cinder cone hills and plains, ending in the high desert. It’s a grueling trip, and not recommended for beginning cyclists. As one biking site says, “it will kick your butt!” The road ends at the Wupatki National Monument, federally protected land that preserves dwellings and archeological remnants of early Native American tribes who settled in the area. Tip: Those who want to avoid serious leg strain can see the entirety of the park by car along the Loop Road.

More than 900 years after the area’s last volcanic eruption, Sunset Crater and the San Francisco Volcanic Field are still breathtaking sights. Whether you choose to hike it alone, get a guide or tackle the 30-mile roadway, the Native American ruins and undulating landscapes here are worth the trip.